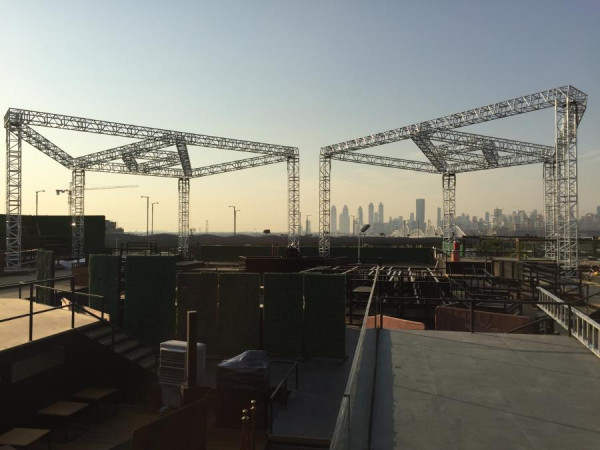 We have been involved with the Sekoya Hotels and Resorts since 2017 in several projects. Starting the cooperation with delivery of arched roof 12x6x6m for the smaller events taking place in Soho Garden area up to the last two deliveries of custom made structures based on the design of the Sekoya Management.

Step one in building several trussing structures in Soho Garden was taken already in 2018 when the slanted roof structure with dimension of 17x9,5x11,8m was delivered to the premises as one of the main stages in the area so far. The complete structure was painted black and equipped with lights, speakers and LED screens in order to create a true stage for various music and show events. In long-term plans of the Sekoya Management lies a possibility of adding two wing structures to the existing roof structure to be able to cover total of 285 sqm. The structure itself is already prepared for this extension from the very beginning and it might be one of the next steps in the Soho Garden project development.

The last stage of the mutually prosperous cooperation between TAF and Sekoya Management was put into production in summer 2019 with the installation taking place a couple of months later. Sekoya Management created very challenging design of two originally triangle structures that are placed next to each other in certain angle in order to create two identical stages for various artists to perform in. However, due to various anchoring and structural restrictions at the venue the entire project had to be re-evaluated in a very short time and in the end the structures took shape of 17x7x11,8m large trapezoid slanted units from TT54 trussing. Their height was accommodated in order to correspond with the already delivered slanted roof structure from our largest quicklock line truss system TT104 and thus finishing so far the astonishing view from Soho Garden to the outline of the Dubai city.

The trapezoid structures are built from upgraded version of the TT54 system with code name TT54R which means that the diagonal braces 30x3mm are welded in all four sides of the trussing segments and thus are enhancing the structural integrity of each truss piece in all directions of possible force application to the structure. The construction itself is anchored to the concrete through steel base plates and steel guy wires are applied in all three walls of the design in order to ensure the stability of the structure without necessity to use external anchoring or ballasts. Lad rating of each structure is 2500 kg in total with 100 kg per meter allowable load on three side horizontal main beams and 20 kg per meter on the front 17m beam.